On a rainy Saturday afternoon in late January, my friend Nancy Osler took me up to see Dominica’s historic Springfield Plantation Guest House in its post-Maria state. She is the on-site Manager of ATREC, a local management company with study -abroad programs for students that partners with  Clemson University in the USA, the owners of the property. This beautiful natural setting of about 190 acres, some of which is rainforest, is located inland on the Imperial Road above the settlement of Antrim.  It’s about a 20 minute drive from Roseau, the capital city.

I spent my first year and a half in Dominica living at this beautiful former 18th century estate, and have loved it from the moment I arrived there in 1997. Over the years, I have been fortunate to return to this special place many times for day visits.  As well, I have been blessed to have become friends with both Managers during my almost two decades in Dominica: first, the late Mona George-Dill and then Nancy Osler, who has been there since 2005. (I have written extensively about Springfield in my blog Ti Domnik Tales. As well, I compiled an  historical overview of the estate, which dates back to the 18th century, for Domnitjen Magazine in 2009).

But now, just over 20 years since I first encountered this idyllic setting , the drastically changed scene rendered me completely aghast. I was basically speechless as Nancy showed me around the property. Truly, I just wanted to cry.  She said that I could ask her anything about it, but I just couldn’t bring myself to do it.  I was so terribly saddened by what I saw in a place that I had cherished so dearly for such a long time.

There was extensive damage to most of the structures on the site,  caused by fierce winds that gusted up to about 160 mph.

This Samaan tree is still standing!

The surrounding foliage fared no better. An ancient Samaan tree, which had withstood previous hurricanes, had succumbed to Maria’s wrath. However, its “twin” was still standing and there was some hope (on my part, at least) that it might rebound in time. The stately Royal Palms that lined the  walkway to the Butterfly Garden en route to the trail to the river did thankfully withstand the wind blasts for the most part, although their fronds were severed or at the very least, stripped almost

And then there was the human factor.  In the days and months following the devastation, Nancy relayed bits and pieces of her traumatic ‘Maria’ story to me. Nancy had sent her staff to their homes before the storm.  She along with Liz Madisetti sought refuge in her apartment, which is located on the property.  While it seemed initially to be a sheltered spot from the winds, the normally calm stream some distance away overflowed in the torrential rains that carried debris from higher in the mountains. When muddy waters entered her living space, she and Liz sought shelter in the bathtub for a few hours. While the water up to that point was no more than four inches high on the floor, there was no way to predict what would take place from one moment to the next.  Then came a few minutes of calm.

When they assumed that the eye was overhead, there was a commotion at her door.  Desmond, a longtime staff member and some of his family had come down the hill (normally a five-minute walk) to seek shelter as the roof of their house had blown away.  But they could not open Nancy’s door.  The wind and water had lodged it so that the family had to physically break it down so the trapped occupants could

escape.  Then Nancy and the small group quickly mounted a flight of stairs and remained for the rest of the night in the kitchen, until the storm subsided.  They had to take turns holding a mattress against the window to protect themselves from some of the outside fury that was trying to get in!

Santi, Springfield’s sweet housecat sheltered under a pillow during the storm. Photo taken by Nancy Osler.

Santi surveys the changed scene at Springfield in the months following ‘Maria’.

Obviously, I had no way of contacting Nancy, or anyone else for several days following the storm.  As mentioned in earlier posts, there was a huge void of communication from Dominica during those first few days. I had sent a text to Nancy immediately following the storm, and I was greatly relieved when I heard back from her a few days later.  She wrote that she was “homeless, but fine” and that she and Liz were safe and had sufficient food and water. Of course, they could not leave the dilapidated premises due to landslides, mudslides, downed trees and ubiquitous debris, which blocked the Imperial Road for several days.

Along with extensive structural and property damage,  most of Nancy’s personal possessions were completely destroyed. But

despite the losses, she remains hopeful that Springfield might be  rebuilt as best as possible in these modern times. But that decision remains with Clemson University, the current owners of the estate. For now,  the local management company ATREC, with its study-abroad programs remains closed.

My wish for Springfield, my first “love” on Dominica,  is that this extraordinary site on the Nature Isle will be resurrected as the magical place in a paradise I once knew, and continue to love.

What Hurricane Maria did to Springfield, Dominica*:

My favouriteguest room in skeleton form… 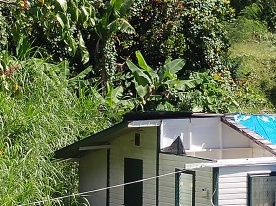 No match for Maria!

The Butterfly Garden and beyond..The Antrim Valley down to the Caribbean Sea. 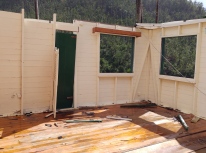 Royal Palms on the Rebound!

Sturdy stone walls. Changed terrain at the burial site of my cat, Tia-pet. 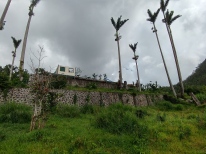 View of the Springfield Guest House from the Buttery Garden below it.